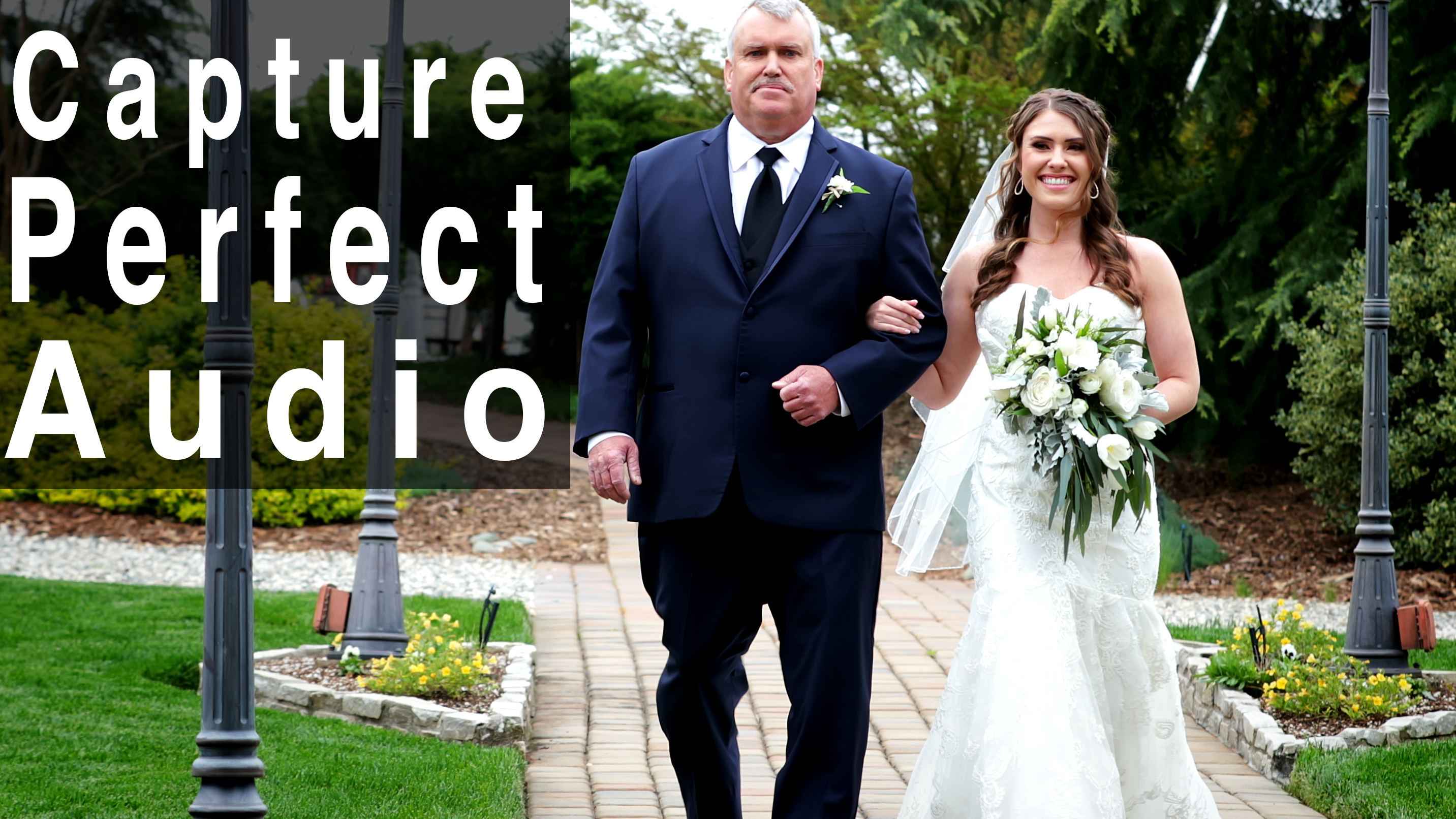 7 Tips On How To Capture Perfect Audio For Wedding Videos

Here's the deal, when it comes to creating a beautiful wedding video, you need to make sure you don't overlook the audio. There's nothing worse than watching a fantastic wedding video to then be hit with awful, hard to hear sound.

Believe it or not, it's much easier to forgive a shot that's slightly out of focus, overexposed, or poorly framed.

However, when it comes to audio, it's nearly impossible to keep the viewer from getting distracted. If you'd like to see an example of what I'm talking about - watch the following clip.

As you can see (or hear) the issue with bad audio is that if you're having to focus on listening to what they're saying, you start to ignore the visuals completely. It's incredibly distracting. On the flip side, if the audio is clean and crisp sounding, you're more likely to forgive the bad visuals.

Whether you're a videographer looking to capture better audio or a couple wanting your vows captured perfectly - here are seven tips that we've learned over the years in filming hundreds of weddings.

This is probably a bit obvious, so let's talk about how to do it properly.

When it comes to external recorders, there's a bunch of options out there. We personally use the Zoom H4N. It's easy to use with a decent battery life.

We also use more than one - we typically attach one directly to the DJ's board, and then use a second to either record ambient audio or record audio by connecting to their speaker.

The idea of having more than one is simply to ensure we have a backup somewhere if one fails.

When using a DJ's board or speaker to record audio, you're not in control of how loud their setup is. We've had it happen a couple of times where we put our recorder on the lowest setting it'll possibly go, and it was still WAY too loud.

A couple of tools we use to combat this are Input Attenuators and this Whirlwind 1x2 Mic Splitter. The Input Attenuators reduce the output volume of the speaker/soundboard so that it won't clip with your recorder. The splitter helps because it allows you to have greater control of the output levels.

Both of these tools have been lifesavers, and even if you don't use them every time, you should always have one in the bag.

As for on-camera microphones, we like to use RODE shotgun video microphones to avoid using the camera's internal microphone. They capture audio much better from further away.

Even when using these shotgun microphones though, they aren't the best option. They sound much better than what the camera captures, but it's still the worst audio that we get during the wedding.

In all honesty, we rarely use this audio. It's there in the off chance that every other option we have fails and is our last resort.

Tip 2: Mic up everyone. Yes, even the bride.

Probably one of the most touchy subjects that aspiring videographers face. How do you mic up the bride... and is it appropriate?

First, it's not only appropriate, it's mandatory. Second, it's much easier than you might think. When we first started filming weddings years ago, we did what everyone else did.

We would throw recorders onto the groom and officiant and then cross our fingers that the bride would sound good through one of their microphones.

Sometimes it worked. Other times, it didn't. Heres a quick video to give you a comparison.

In the first clip, it's apparent that the bride wasn't wearing a microphone. You can hear what she's saying, and on it's own, it may not sound all that bad.

that is until you watch the second clip, and hear how much better it sound when the bride is mic'd up.

So how do you do this?

First off, you need to get a small recorder.

The one that we use and highly recommend is the Tascam DR-10L.

This microphone is small, has a locking connection so the receiver won't unplug by mistake, and the record button is protected to prevent accidentally turning it off mid-ceremony.

It records very clean audio, and is super easy to use. It also comes in white or black, so we opted to get one in white. This way, the cord will blend into a white dress when it's on the bride.

As for recording the Groom and Officiant? It's pretty straight forward. The receive goes into their jacket pocket, and the microphone attaches to their jacket. We usually place the microphone under the coat to help protect against the wind (we tested inside and outside, and you couldn't tell which was which- but it did better under the jacket when there was wind).

Guys are easy... but how do you get it on the bride?

Once the dress is on, we then put the Tascam recorder into a velcro sleeve that we can strap to the bride's inner thigh. The one we use is the Ursa Thigh Strap from Trewaudio.com.

Make sure to get it in white so that it doesn't show through the dress. It's also not a bad idea to get a couple different sizes - however, we have a large, and it has worked on all of our brides so far.

Since using these solutions, we've captured perfect audio every time for the ceremony. It's so easy to set up, it's non-intrusive, and as long as we've talked about it beforehand, our brides have been totally cool with it.

Okay, so we've nailed down the audio for the ceremony, but what about during the speeches?

Tip 3: Bring all the connections

The last thing you want to happen is to walk over to the DJ with your recorder to find out that the only plug you have won't work with their system.

When we first started, this happened to us. Only once. Because I promise you, it only takes one time never to make this mistake again.

We always bring a supply pack with every connection and adapter you can think of.

Typically, a DJ's soundboard will either have XLR, 1/4, or RCA ports. With that in mind, we will have multiple cables for each option. We have some that are short as well as long in case we need to have the extra cable length. We also bring a bunch of adapters.

For every connection, we'll make sure to have adapters to fit male to male, female to male, male to female. This way, no matter the situation, you're prepared to plug in and record.

Tip 4: Attach a recorder to the microphone

This is something that we didn't do for a long time, and looking back, we can't believe we didn't do this sooner.

Any time someone is talking into a microphone, we always make sure to have a recorder attached to it.

It's not our first choice when using the audio for our videos, but it's beneficial to have it in case something goes wrong with our other audio sources.

The easiest way to do this is to use a microphone sleeve and a skinny recorder. We found that these sleeves work well with this sony recorder.

Simply slide the recorder into the sleeve, and you have a direct back up audio source to make sure you never miss the speeches.

If it's not apparent by now, then it needs to be said. You should have as many backup options as you feasibly can.

We use at least 7 different recorders on each wedding to capture audio in 4 different ways.

This might seem like we're overdoing, but we're not taking any chances. Our goal is to make sure we capture the audio no matter what, and we take every precaution to do so.

The last thing you want is to get back to the editing bay to realize that a recorder didn't turn on, and that you completely lost the ceremony/toasts audio.

There's way too much uncertainty when it comes to wireless recording.

The connection can drop out, and you could end up with audio that either doesn't record or is continuously cutting in and out.

Also, you run the risk of interfering with the DJ's wireless microphones.

Most wireless recording devices operate on the same frequencies as other standard wireless devices. Because of this, if you show up with wireless recorders, I can almost guarantee the DJ will not be pleased.

Wired connections are far more reliable and significantly easier to use.

We realize that we mentioned how important it is to capture audio from the DJ's soundboard, and we stand by that - it's still the best option when available.

And most DJ's know this and are more than willing to work with you.

But it's important to understand this:

It's not the DJ's job to record the audio; it's yours.

Too many times we've seen it happen where someone records all of their audio straight from the DJ's soundboard, only to have it fail.

If this happens, you cannot go back to the couple and blame the DJ. You're the video professional here.

Even if you did everything right, and the DJ was the one who made a mistake. It's never their responsibility, and you need to keep that in mind.

Common situations that may impact your audio from a soundboard include:

Honestly, we could drag this list out, but you get the idea.

That's why we always show up fully prepared. And if for some reason we can't record from the DJ's sound system, we'll be fine.

Follow these tips and we're confident that you'll capture better, clean audio every time. Let us know in the comments below if you have any tricks that we didn't mention here. We're always open to learning new ways to get better audio.